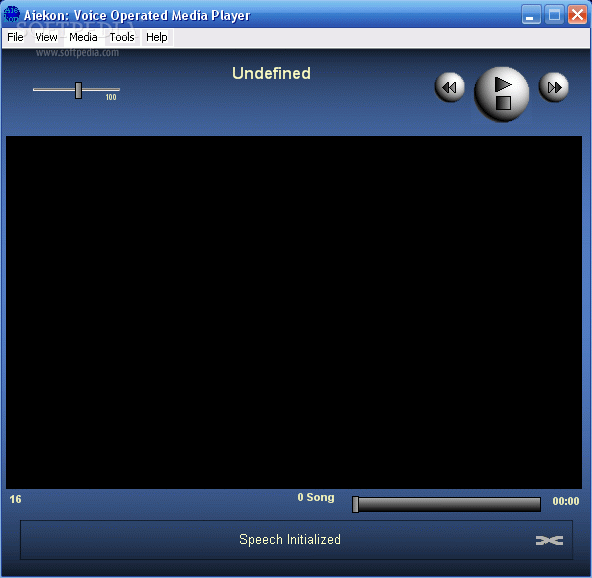 Aiekon is our pride and joy. Aiekon: Voice Operated Media Player is a useful and fully-featured media player with voice commands.

As on should expect from any media player, it will play, pause, stop and mute a song. It will also go to the next or previous song in a playlist and allow you to change the volume. Its uniqueness comes from the fact that it can all be done with your voice! We didn't stop there, we alow the user to call up a specific song by the title, or call up an artist or genre.

Nothing is prefabricated here, the genres and artists are a complete list from your collection of music and it will update when you add or delete music. Beyond the media commands you can also control Aiekon itself in the way it looks and works just by your voice. Even beyond that, there are many more features that you can change using dropdown menus like transparency, audio and visual recognition of commands, and whether or not Aiekon will talk to you.

Aiekon is full of fun features and is easy to use. It feels as though you're in a sci-fi movie!

Aiekon has all the features of a full media player but has the added advantage of being controlled by your voice. It also comes with the conventional controls for times when silence is needed. Along the bottom, Aiekon displays what you say as you say it and confirms when a command is recognized. Simply say "Find Symphony Number 9" and it will appear in the playlist on the right. Then say "Play", and it will play. Adjust the volume, mute the song, pause or go onto the next song. Its all there!

Once you have found the music you wish to hear, change the look of Aiekon to display visualizations that move with the music while still allowing full control over the songs. Switch to the full screen mode and still move from one song to the next, or even minimize Aiekon while you work, it will still hear your commands!