A screensaver that allows users to marvel at the splendor and magnificence of Athens by day and night, directly on their computer's screens 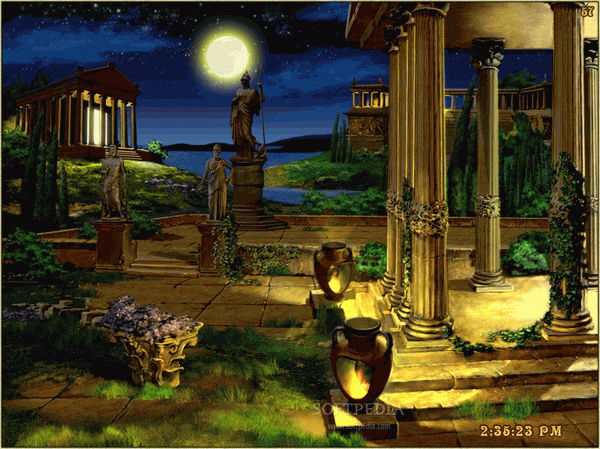 Some argue that ancient Greece is the cradle of European civilization. Regardless of whether that is true or not, it is the birthplace of many legends and myths that have some of the greatest heroes of the past as their protagonist.

Around the World: Athens is a screensaver that will bring a little piece of the Hellenic history to your computer system.

The app takes the most generic elements that could cross your mind when you think of ancient Greece and puts them all together to form the ultimate Hellenic experience.

You have your famous Greek statues and marble columns, your amphoras, the Acropolis in the background, and a wonderful sea in the background that complete the whole package. The art style is in no way meant to be realistic, but the way it is depicted is reminiscent of your typical hidden object games (HOG).

The visuals are also accompanied by your typical greek tunes, making you think you are right there in the middle of olive tree country.

The 2D visuals have next to no impact on your system's performance regardless of how low-end or old it may be.

This ensures that the app is available for a wide variety of audiences. If however, you do encounter any performance issues while this app is running, such as decreases in FPS or response time spikes, then you may need to adjust some of the audio and visual settings from the screensaver manager. There you can choose to disable the environmental effects (such as rain), add an FPS counter or a clock, switch it between 12h and 24h formats and so forth.

Around the World: Athens impresses through both light visuals, atmospheric music and the smoothness with which it performs on any system, making it especially useful for anyone with older computers.