A debugger for batch scripts that comes with syntax highlighting, line numbering, breakpoints, and other handy features to help you develop faster and more efficiently 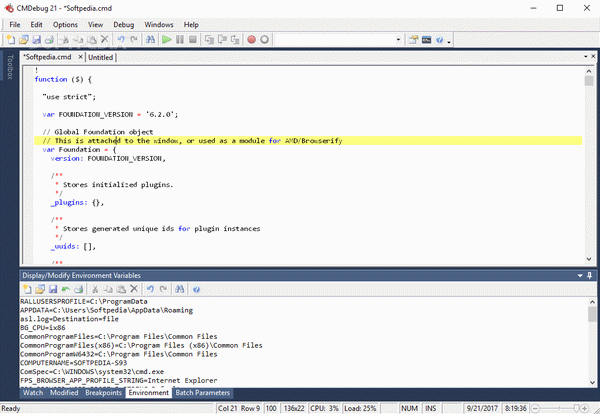 CMDebug provides developers with a standalone edition of the batch debugger in the Take Command IDE, allowing them to build and run batch files. Aiming to match the syntax of the CMD.EXE in Windows, this application can be used together with the Take Command runtime to write scripts in the TCC language.

The layout of the interface might seem familiar, as it resembles other debugging and IDEs. The main window is split into two sections, one dedicated to the editor and the other designed to help users browse the environment variables, the breakpoints, the parameters, and so on.

The editor comes with the standard set of traits to ensure a comfortable working environment for a programmer. To be more specific, it features syntax highlighting for the TCC language, line numbering, tab-based display of multiple individual files.

There are a few handy features designed to allow quick code editing and manipulation. For instance, users can toggle comments on a section of text, remove blank lines and compress spaces with just a few clicks. CMDebug also enables one to tabify a selection and change the text case just as easily.

The debugger can detect bugs in the code, allowing users to set breakpoints to closely monitor the code execution. It can lookup errors and help the developer find its source, evaluate expressions, and monitor code sections.

The advantage of the CMDebug application is that it tries to closely follow the behavior of the CMD. It works with CMD-compatible batch files (.BAT or .CMD), as well as BTM files, which are TCC-RT-compatible scripts. When used with the latter, it toggles the TCC Syntax active, providing the complete command set of the Take Command runtime.