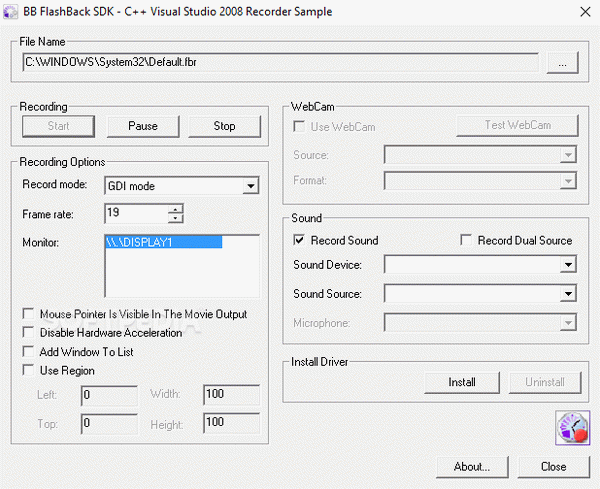 The FlashBack SDK comes with a rich collection of components and samples ready to help developers integrate screen and webcam recording capabilities into their applications. It seamlessly integrates with Visual Studio and other development environments, such as Borland C++ Builder, Embarcadero, or Delphi, and can be used with practically any programming language that supports COM objects, including C++, C#, and VB.NET.

The purpose of FlashBack SDK is to provide all the features and components needed for developers who want to create screen recording software tools with integrated playback and editing options. Its ActiveX/COM objects allow users to experiment with various options. They can record the full screen or just an area of the desktop, a certain window, or a particular process, saving the output as a video with a high FPS rate and lossless image quality.

The SDK also features built-in video playback capabilities, as well as a few tweaks to allow the integration of sounds, images, and boxes within the clip.

Not only that, but it also comes with editing functionality, meaning users will be able to make changes to the video and enhance it, having various image and sound quality controls at their disposal.

The output can be saved in some of the most commonly used formats, including MP4, AVI, WMV, or as a QuickTime or a Flash video (FLV, SWF).