A Qt component for adding Flash, Silverlight and Adobe Reader to your projects. 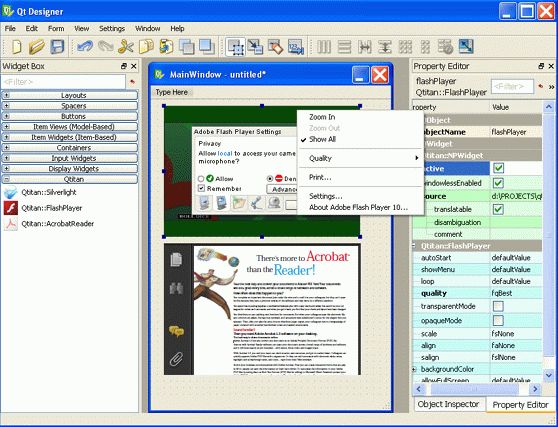 If you develop applications using the Qt framework, you should definitely be well familiar with all of its advantages and functional limitations. Although Qt lies in the heart of thousands of projects and has been on the market for a good while, it still lacks some very important features that would considerably facilitate the work of Qt developers creating mobile and desktop applications with extended capabilities.

A good example of a kind of functionality that Qt would really benefit from is a multimedia component for integrating Flash, Silverlight and Adobe Reader into any Qt project. And if the extension of multimedia capabilities of Qt is exactly what you are trying to do, make sure to check out the Qtitan Multimedia library!

Qtitan Multimedia is a powerful library that will enrich your Qt applications with a wide range of multimedia features. The library completely integrates with Qt Designer and allows you to add Flash, Silverlight and Adobe reader functionality to your apps the same way you add fields, tables and other regular controls.

Qtitan Multimedia is essentially a class container inherited from the QWidget class and capable of displaying Netscape-compatible plug-ins with NPAPI architecture. The container works with plug-ins that require a separate window and those that can display their content in the Qt window.

This makes it possible to combine the content generated by Qt itself with the content produced by plug-ins. Being a native Qt component, Qtitan Multimedia utilizes the signal/slot system, the prime mechanism used for connecting objects in Qt projects.

Qtitan Multimedia can be added on the design stage or during runtime and does not require any additional libraries apart from Qt (QtCore, QtGui, QtScript). Written in C++ using Qt SDK, the library supports Visual Studio 2003, 2005, 2008, 2010, Qt Creator and any other IDE that Qt integrates into. Give Qtitan Multimedia a try to see what it's really capable of!