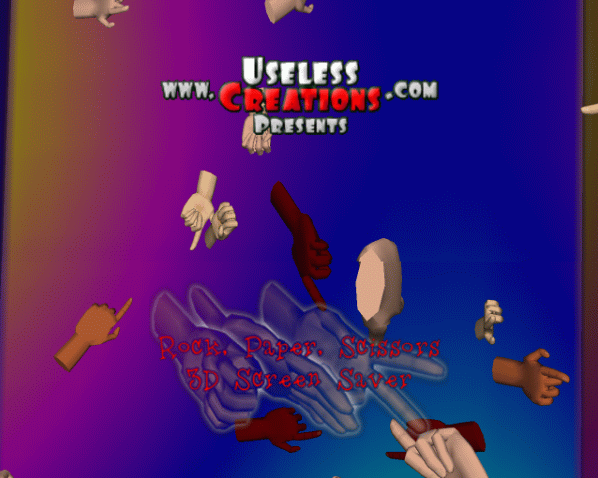 Recently, I kept hearing about this world championship of Rock, Paper, Scissors, and how the champion of Victoria (my state) had fallen off a bar stool and broken his wrist while celebrating his win in true Australian fashion.

As the same time, I was emailing back n forth with a dude who had an idea for a screen saver involving a hand (which I may still make later), and I remembered that I'd made a 3D model of my hands a couple of years back for a different screen saver (you get extra ponts if you know which one it is).

And suddenly, I had a fantastic idea!

Ok, so maybe it isn't, but I still kinda like it. I've watched it for a rediculous amount of time, and there's just something about it that I like. I also kinda think it's missing something, but I'm not sure what. Suggestions are always welcome. Either way, I like it, and I hope you guys get a kick out of it too!

Just incase you're not familiar with Rock, Paper, Scissors, it's a stupid little game where you shake you hand against someone else and you both pick either Rock, Paper or Scissors. The winner is determined by the combination of what's been chosen. Rock blunts scissors. Scissors cut paper. Paper covers rock. If they're the same, you have a rematch