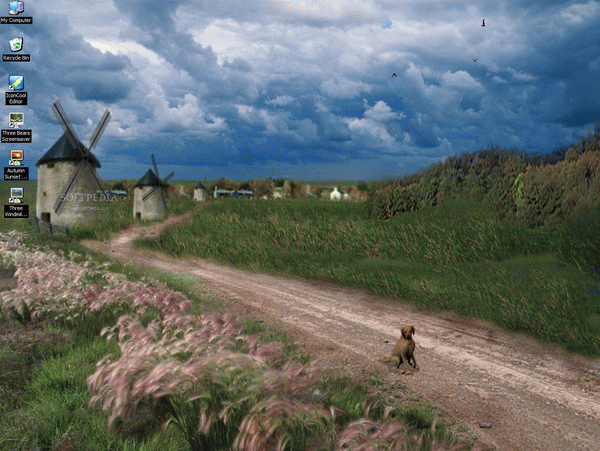 Do you know that the fairy tale differs from a reality? There are always heroes, mighty and majestic in a fairy tale, and people live near to them. And people live in safety because heroes always preserve against troubles and bad evil.

And in this fairy tale there are heroes who very long time ago came in this place and gave the promise always to help people living in this land.

And then the three heroes have turned to the three windmills and began to grind flour for the people, and the people started baking bread.

Stately and unshakably mills from a white stone stand up to this day.

Among the woods and fields they will stand against a wind from year to year; millstones of mills will turn, milling grains in flour.

The old dog walks down the road, funny limping. What is he doing? Perhaps he has come here together with ancient heroes what have turn in mills and now lives near, not wishing to leave the owners?

And the sky lights up with bright red color, the sun somewhere comes and clouds become crimson from its beams. Night approaches.

But mills - heroes of old times - and their true friend the dog - do not sleep in this fairy tale. The dog still walk on road meeting everyone who goes in village.