Translate to and from 100 languages with this simple application powered by Google Translator and Bing Translate, without the hassle of having to open web browsers 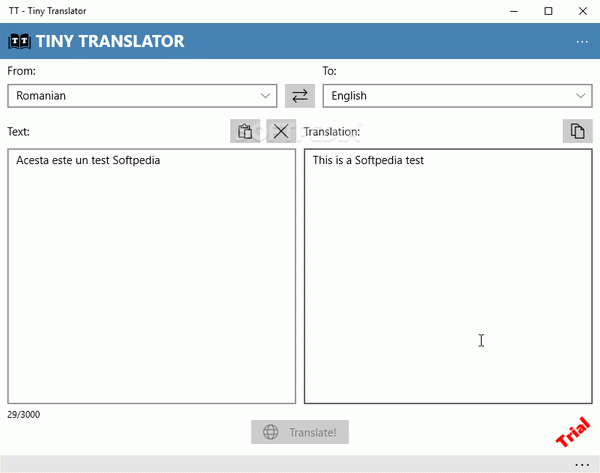 As technology brings us closer together, language barriers can be quite an issue, and for those of you who don't have the time to learn a new one from scratch, an online translation service or app can come in handy. One such application is Tiny Translator, powered  by Google Translator and Bing Translate.

With 100 supported languages and powered by two of the world's most powerful translation services, this application can help you even when you are dealing with less popular languages such as Zulu, Scots Gaelic or Igbo. Since it uses the coding from those engines, it's just as reliable as using the web browser.

Compared to most Windows Store Apps, Tiny Translator's GUI (graphical user interface) is unimpressive but, considering its purpose, it's better this way to avoid distractions. The only customization feature available in this program is the size of the fonts.

The worfklow is simple: select the language from which you are translating, input the text in the window right under it (please note that any text has a maximum 3000 character limit), select the language you want to translate it into, press the "Translate!" button and that's it, the text will be translated in a matter of seconds.

One aspect to consider is that, because the application is powered by Google and Bing, it shares the same translation inaccuracies such as the inability to translate lesser known language-specific phrases (please note that popular phrases such as "What's up?" are translated correctly and not in a word-per-word fashion).

Another issue is that, since the translation engines are online, you will be unable to use the app in case your device is not connected to the Internet.

Taking into consideration all features as well as limitations, Tiny Translator proves it is a simple-to-use translation tool that focuses on getting the job done as fast as possible without cluttering the interface with options and settings that would otherwise distract you.