TweakLite Assorted - Clever Tweaks not to speed up Windows, but to enchance the Current User's computer working 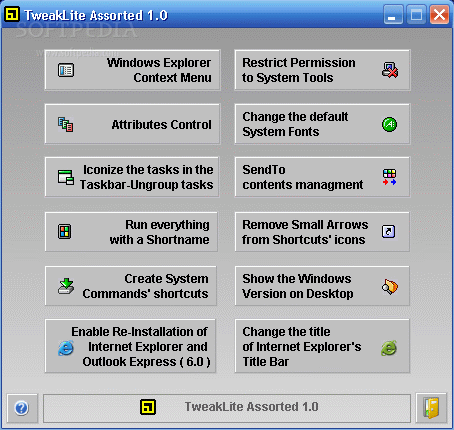 Clever Tweaks not to speed up Windows, but to enchance the Current User's computer working.

￭ To add some extra items in Windows Explorer context menu, to control files' and folders' attributes, to iconize the tasks in the Taskbar and to ungroup them if you wish.

￭ To make any program or file to run with a shortname (ie. notepad), to create System Commands' shortcuts, to give Internet Explorer or Outlook Express 6.0 the possibility to be re-installed again.

￭ To restrict permission to System Tools, to change the default System fonts, to manage the SendTo menu contents.

￭ To remove the small arrows from your own shortcuts' icons, to show Windows version on the desktop, and to change Internet Explorer's title in its Title Bar.