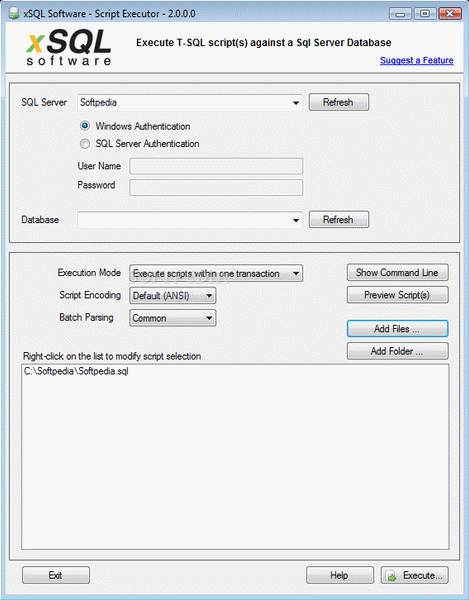 Script executor is a small, free utility that allows you to run multiple T-SQL scripts at once against a Sql Server database.

You can choose to run a single script file or a group of files identified by a pattern. xSQL Script Executor will allow you to select different script execution modes, run it interactively through the user interface or in batches using the command line options.

The script files can also contain multiple batches separated by the GO command.

Script Executor provides a simple interface that you can use to specify the followings:

SQL Server database along with the credentials.

T-SQL script files that should be executed. You can select specific files or file patterns. You can choose for example a script named c:ScripsDataUpdate.sql or the pattern c:Scripts*.sql which includes all the files with .sql extension in the c:Scripts folder

Script Encoding, which determines the encoding that the script files have been saved with. ScriptExecutor supports ASCII, ANSI, UTF-8, UTF-32 and Unicode encodings. You can verify the encoding by clicking on the "Preview Script(s)" button. If the scripts appear correctly in the preview window, the encoding you have chosen is correct.

Regardless of the execution mode, if one script fails the process stops.

Execute multiple scripts at once - you can choose to run specific files or a group of files identified by a pattern, which is a file extension such as .sql. When a pattern is specified, all the files that meet the pattern criteria will be executed in the alphabetical order.

Support different transactional execution - you can choose to run the T-SQL scripts in three transaction modes.

"Execute scripts within one transaction": Runs all the scripts in one single transaction. If one script fails, the entire set is rolled back

Robust error handling - depending on the transaction, when a script fails, either the failing script or the entire set is rolled back. A failing script stops the whole process.

Simple and intuitive interface - a very simple interface allows you to finish your task with very few clicks. Asynchronous execution mode of the scripts provides for a smooth run.