Create an interface between end users and applications written in .NET languages with the help of this library that can be used with Delphi 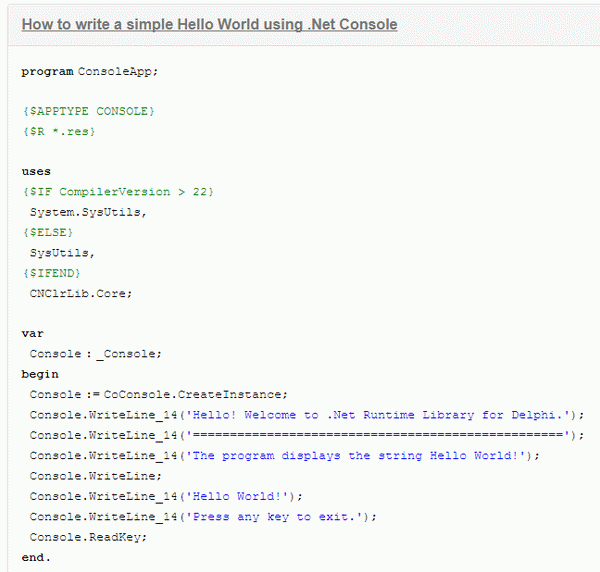 .NET Runtime Library for Delphi is a library that can be used to facilitate an interface between users and applications written in .NET languages like VB.NET, C++, Delphi.NET, and Script.NET. It features low-level routines that are used by the Delphi compilers to merge Pascal sources with .NET Framework and other .NET libraries.

The tool is compatible with Delphi Professional, Delphi 10.2 and older versions (until XE and 2010). In fact, different packages can be downloaded from this page, depending on which Delphi version you're using. You can also check out comprehensive user documentation in HTML and PDF format, together with compiled demos.

Assemblies can be loaded from .NET libraries or executables without making it necessary to register the libraries as COM in Delphi. In a similar manner, .NET assemblies can be loaded from the Global Assembly Cache (GAC) without having to register the assembly types as COM objects. Users will be able to access the .NET assembly types and members with fields, properties, methods, events, and so on.

Two main libraries are included in .NET Runtime Library for Delphi: host and framework class. Another part is played by the .Net Assembly WSDL Importer, which is important for importing not only .NET assemblies but also WSDL and Web Service XML schemas.

Three distinct types of licenses can be purchased: Standard Edition (has only the host class library), Enterprise Edition (adds the framework class library) and Professional Edition (throws in the .Net DLL/WSDL Importer for Delphi too).